Why I don’t “believe in something” and why you shouldn’t either. 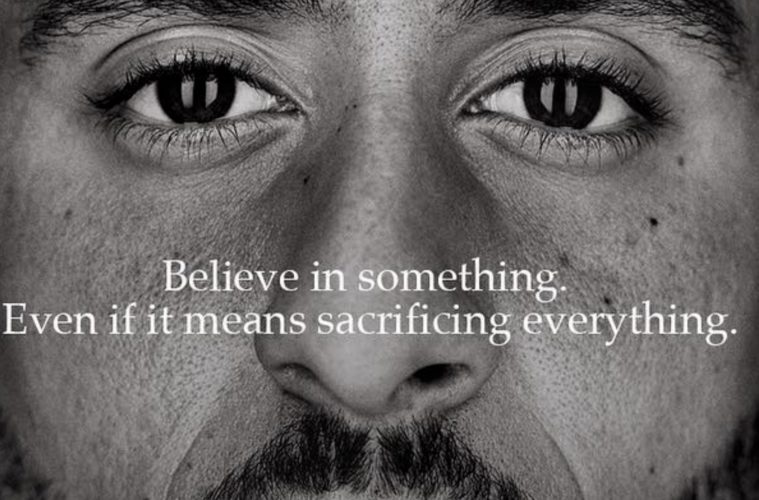 This is not a post about Colin Kaepernick, kneeling or Nike. This is just an observation about the slogan.

“Be yourself,” “chase your dreams,” and “follow your heart” seem to be the mantra of modern America. And this Nike slogan is just the next wave of agreement to the same doctrine.

On the surface this seems wonderful. I mean who doesn’t want to break the mold of conformity, challenge the status quo and chase their dreams? This is what we want for our kids! This is good! Right?…

For just a second I want to challenge what we have assumed without considering.

Think about this: Wouldn’t “Believe in something, even if it means you have to sacrifice everything” be a great slogan for Islamic terrorists, school shooters, and KKK leaders? Certainly Hitler, Stalin, Pol Pot, and the most evil dictators of all time could have benefited from this slogan. Cult leaders like Jim Jones, Charles Manson, and David Koresh preached this slogan long before Nike… and many died senselessly because of it.

Of course, wouldn’t “Believe in something, even if it means you have to sacrifice everything” also be a great creed for the American Revolution, NASA, and missionaries. It would certainly be a great slogan for the early Christian apostles… and maybe even Jesus himself?

Is it possible that the same slogan could inspire both good and evil? How can this be? Why would this be?

So this “something” we believe in is crucially important! So what is it? Again, in modern America, we are taught to “Be yourself,” “chase your dreams,” and “follow your heart.” But isn’t a child molester “being himself”? Isn’t a terrorist “following his heart”? Wasn’t Hitler “following his dreams”?

These slogans of our day all begin in the heart – so the “something” always begins in the individual’s heart. Therefore, whether the “something” is good or evil is determined by the state of our hearts…. And let’s be real. The state of the American heart is corrupt.

The Nike statement “believe in something, even if it means you have to sacrifice everything” is only as good as the heart of the person listening. Prisons are full of people who followed this advice with an evil heart!

I would just like to suggest that before we tell someone to “believe in something, even if it means you have to sacrifice everything,” we should first inspect what they believe in. And before we tell people to “follow their heart” we should first ask them to examine their heart. Several thousand years ago a wise man wrote that “the heart is deceitful above all things” (Jeremiah 17:9)

One of the reasons our country is in the shape that it’s in is because too many people with corrupt hearts are “following their heart,” “following their dreams” and therefore “believing in the wrong things.”

So maybe before we say “follow your heart” we should follow the example of a great King who once prayed “Create in me a clean heart, O God.” (Psalm 51:10).

It’s really all about the heart. And I know of only one ultimate person who can change the heart: Jesus. The Bible is full of people whose hearts were changed by The Lord. And so is this modern world we’re living in. I’m one of them.

Therefore, I prefer to alter the Nike slogan a little bit. I choose not to “believe in something.” I’d much rather encourage you to “Believe in someone (Jesus), even if it means you have to sacrifice everything.”

If you enjoyed this blog be sure to subscribe at the top left and share it on social media by copying and pasting the URL to your social media feed.

Subscribe to our Newsletter right now to be updated. We promise not to spam!